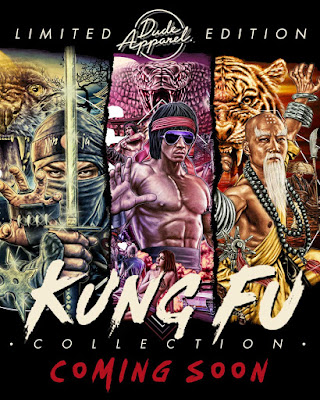 Coming soon Dude Apparel - Kung Fu collection… A series of 3 designs which harp back to the glorious days of all things Martial Arts in 70s and 80s, from movies like Drunken Master and Pray for Death, to classic arcade games like Last Ninja and Bad Dudes!

Dude Apparel is an all-new clothing label from artist Tom Hodge aka The Dude Designs.

As The Dude Designs, Tom created a cult name as a leading figure in the resurgence of the ‘old school’ poster art aesthetic behind such films as Hobo With a shotgun, Savage Streets, The Innkeepers, They Live, Wolfcop 1&2, The Other side of the door, Joy, Spy and The Heat.

Tom’s passion for retro film art and VHS also combined in his best selling book VHS: Video cover art, which was the first book to take a look at the lost art of the home video boom in the 80s and 90s.

Tom has even stepped behind the Camera to create ‘Teddy Bears Picnic’ his first film outing, which was a proof of concept short, starring Abby Miller (Justified & The Sinner) and Laurence Harvey (Human Centipede 2+3) and has successfully toured around the global film festival circuit.

Through Dude Apparel Tom is now able to bringing his unique visual aesthetic and stylistic approach to the world of clothing. Creating pop culture inspired conceptual collections as a new voice in the world of t-shirt art, apparel, accessories and homeward.

Dude Apparel is now pleased to see the inaugural release of…


Ever fantasized about running your own VHS video store in the glorious days of the 80s and 90s?  Well, now you can with our new range of stylish video store staff tees, sweatshirts and women’s tank tops. In ‘premium’ double-sided and ‘Standard’ single-sided options. 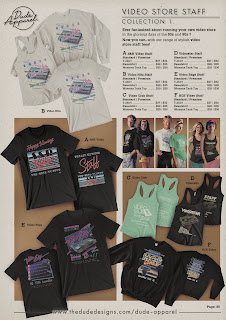 Based on original 80s video stores for authenticity. Dude apparel has revisited these bastions of the VHS rental boom and reinterpreted them with all new designs to create this collection of high-end fashion apparel for your viewing and wearing pleasure… Which video store will you run?
A few words from Tom Hodge: 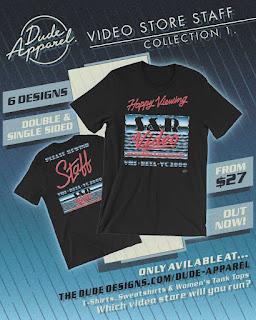 “I’m very proud to launch Dude Apparel after a year's planning and organisation, with an inaugural collection that combines a lot of my passions VHS, Vintage and 80s/90s fashion.

I wanted to create a collection that had a conceptual edge behind, something I have dreamed of finding in a vintage store… RADICAL VIDEO STORE STAFF TEES! 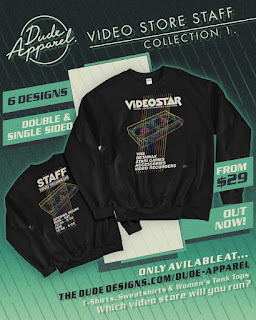 ‘VHS’ Video collecting has really exploded globally in the past 3 years since I released VHS Video cover art. With tapes tripling in value from an average of 20p to £20+ now!

There is a real connection to VHS tapes and Video stores, the act of browsing the shelves of numerous salacious tape artworks for such incredible titles like Neon Maniacs, Surf Nazis Must Die, Bronx Warriors and The Video Dead…They REALLY don’t make em’ like that anymore! 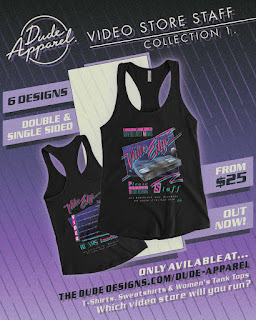 A weekends entertainment was defined by the excitement of going to the video store, these numerous independent ‘mom and pop’ video stores which appeared everywhere and always had these wicked names like Videostar, or Video Edge. They WHERE the entertainment hub for a generation growing up in the 80s/90s and consequently have been ingrained emotionally in our psyches as adults. So I wanted to celebrate that and I’m beyond excited present you with the righteous “Video Store Staff Collection 1.”

Revival of the news site

It's been a while but I am reviving the old blog as a general news site now to keep you updated on the latest releases and news for Tom Hodge The Dude Designs.

The Dude Designs is now branching out into various areas to become a renaissance man of design!

You will find the website now www.thedudedesigns.com separated into five new sections;

2. Dude Apparel - My all new clothing label and store.

4. Filmography - showcasing my work behind the camera (coming soon).

Best Movie Posters Of The Year

Movies Of Hollywood [The Heat]

Shock Till You Drop [The Heat, The Sacrament & Frankenstein Created Bikers]

Email ThisBlogThis!Share to TwitterShare to FacebookShare to Pinterest
Labels: News 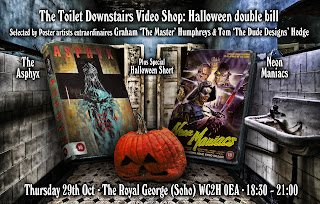 Graham Humphrey's (Amazing original 80s poster artist) and I, have been brought on to select a special Halloween VHS treat for folks in London on the 29th of October. 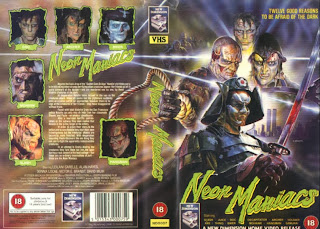 I chose the brilliant 80s cheese fest 'Neon Maniacs' its a film i remember been obsessed with as a kid when me and my cousin saw the trailer, i think you will agree it looks pretty damn cool!

I also made some fitting VHS and Betamax headstones for the night, so if your in London and dare come out join us at The Royal George (soho) WC2H 0EA from 6:30, Its a Free night and all are welcome. 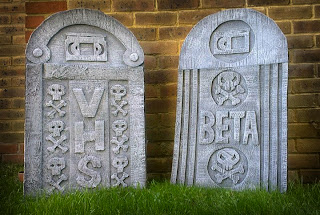 "When the world is ruled by violence and the soul of mankind fades, the children's paths shall be darkened by the shadows of THE NEON MANIACS"