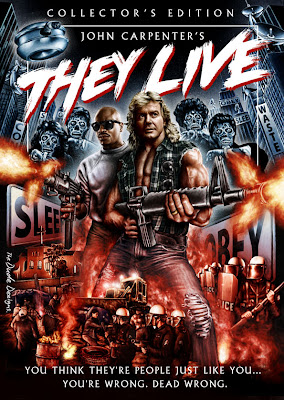 Due to the write up being sooo long on this one im attaching a more condensed version bellow, then read on for the more waxing lyrical original, let me know which you prefer for the forthcoming site:

"i went out to illustrate piper as a modern religious saint character rising up against the adversity, the police and authorities are crushing the homeless corrupting and spirituality (church). then above the ghettos are the towering office blocks of corporate industry dominating the skyline and looming over you with there consumerism messages and the rich aliens are enclosing in the blue collar workers make there last stand. all wrapped up in a sudo religious iconography meets sci-fi, action, social commentary epic interpretation, in a sort of its post modern delivery but all done with pure love, i listened to the soundtrack continuously whilst working on it!!!"

Well heres my artwork for They Live, As you may (or may not) know I'm a massive John Carpenter Fan also a huge Rowdy Roddy 'Hot Rod' Piper Fan from my wrestling days (they should have made Tag Team a series!!!). i absolutely love They Live, So you can rest assured that this title has been treated with absolute care, attention and devotion which it rightly deserves !! (so that's the gushing over as the nun said to the vicar!). i was pretty excited to get get unleashed on this juggernaut of social commentary meets sci-fi action...

I wanted to create something in a true 80s keyart style, that was VERY action packed, putting piper in an Italian poster style, testosterone driven almost god like religious icon standing aloft like a beacon of social commentary surrounded by the imposing odds of alien control, and NOT forgetting Keith David (who sadly gets pretty much left off all the promotional material for they live, the mans survives The Thing! hes A LEGEND in his own right They Live, The Thing, Road House, platoon COME ON!)

So the challenge lay in trying to compact all that in a design and integrate a story story-line narrative and not have it as just a mass pile of stuff!

This design was actually the merging of two concepts. on had a lone piper in Bank mode and the other had this pair which was inspired by the final shootout sequence. 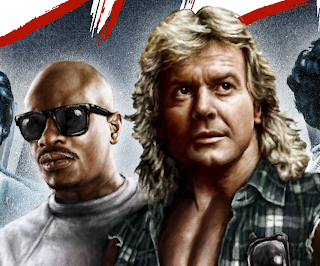 For pipers image I wanted this rippling muscle god with the awesome blond streaked mullet flowing man (he is massive in the film, the guy was a wrestler and that's where most of his fan base comes from, so i needed to represent the 80s WWF crew). so i thought to hell with it and just rip the god damn the shirt sleeves off, i know it doesn't happen in the film but THAT'S the point, pick up a copy of any Bronx Warriors on VHS and you will know where I'm coming from. Visually this is all steeped in 70s/80s Italian poster/video art history and people like Enzo Sciotti (its so ingrained in my brain now that its almost instinct). He has a total shooting from the pelvis stance of resistance as he's striding adversity. Like i said i did want to give this piece a saintly religious iconography vibe... which is something that MUST have been an influence on the Italian works too, with there culture so steeped in the church, that's my theory anyway!. I didn't want to cover his eyes as i felt it removed the emotion, so Keith was given the cool shades to convey that and piper has his in the pocket. 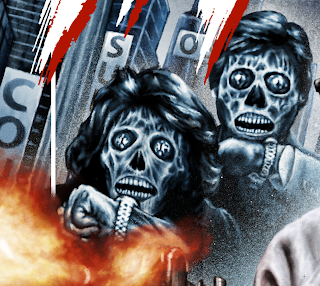 Colour was the big thing which allowed me to separate out the elements to prevent it all getting too busy. as the alien world is seen in monochrome throughout the film i wanted to keep true to that but stylise it slightly with a more blueish hue. when it came to the Aliens i wanted to convey a sense of claustrophobia so all the buildings and aliens are leaning inwards like waves about to crash in and drown the main characters. 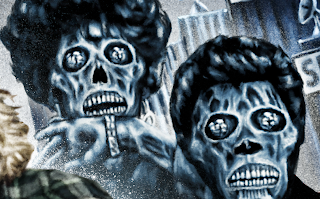 For the bottom section i wanted some action sequence which would depict to depict the other side of the world and have the police alien lines (which is how they are seen to the average Joe), the eviction scene with the church (subliminal religious/saint imagery again) is such a pivotal element that i had to get it in. Also whenever you see the police they always bathed in a red flare light so that was a great counter balance to the blue of the top! 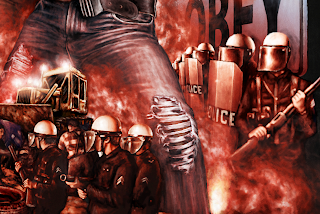 The guys at Scream Factory wanted me to use the original title treatment. Then I had to use Albertus font for all the other copy of course, being a classic Carpenter film. I am hoping to do a limited edition print run of this (when the websites up) and will be shifting the text elements around to make it more theatrical poster esque, so i will also have to change the title treatment which im toying with the idea of putting it in Italian 'Essi vivono'... watch this space!!! 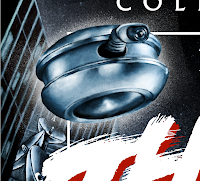 As always right click on the close up sections to get a detailed view.