Hello back after a bit of absence with the new Curzon Midnight Moves flyers for Labyrinth and Bad Santa.

So ill start with Labyrinth. I wanted to recreate the feel of 80's recreated comic book illustration style like you would see in the pages of 'look in' magazine (if anyone else used to read it as a kid) or you got on various 80's merchandising (see here: 1, 2, 3). Due to there being a lack of technology and decent version of Photoshop at the time.

So after a bit of research i found they did do a Labyrinth comic book and so based the character illustration style around that and worked it around the Ball theme for the night. 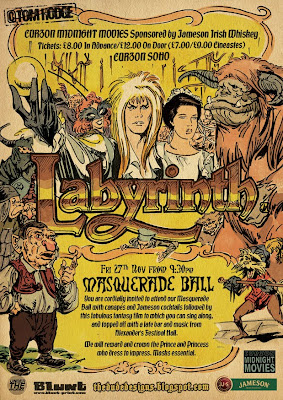 For the Bad Santa i wanted to give it that quirky twist again. So i based the design around emphasising the BAD in the title and treated it like a 50's style pulp film poster. (for example: 1, 2, 3, 4)
I kept the illustration to a simple 3 colour print, offsetting them slightly. Then pulled out some quotes from the copy and had fun playing with the type. 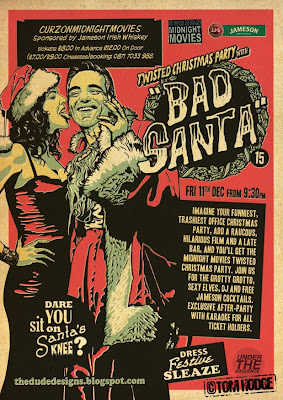