What Culture Interview by Neil Innes

Last year i read a great peice by Neil Innes on: 'The lost Art of the Film Poster'
So it was great to sit down and chat about The Dude Designs work with him for WhatCulture: 'The Art of Film Art' 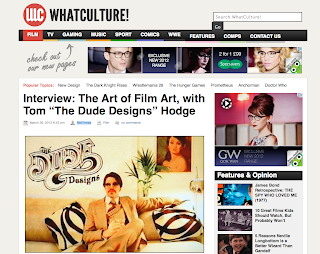 Would You Rather Poster 1 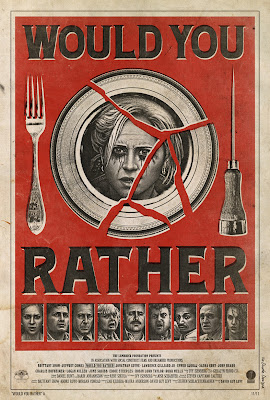 Here is one of two poster designs i did for Would You Rather staring Brittany Snow, Jeffery Combs, Sasha Grey, 'Desperate to help her ailing brother, a young woman agrees to compete in a deadly game of "Would You Rather," hosted by an sadistic aristocrats 'Lambrick Foundation'.

I wanted to do something a bit more off the wall for this one (as the 2nd design i did has a more classic poster style) so i could try an be a bit more out there for this design.

When i initially spoke with David Guy Levy (the director) he liked to think of it as 'Funny Games' meets 'Clue' which pretty much set on the direction for these designs.

Although the plot mainly revolves around Brittany Snow, there are 9 guests at the table with some really recognisable faces amongst them Sasha Grey (lots of 'ahem' HOT movies) , John Heard (C.H.U.D), Eddie Steeples (My name is Earl) and Robb Wells ('Trailer Park Boys' who is the first actor I've got to illustrate up twice hobo being the other one (he's the dude in the man hole cover) and many others... so trying to fit all the guests in plus focusing on Coombs and Snow was just going to get messy so i used the old 70s disaster star fest technique of having the actors or 'guests' layed out in boxes.

To create a different sort of design i looked at a lot of the old polish posters and Swiss 'Plakatstil' stlye designs of the 60s, i also wanted to take a swing at the modern 'new wave' minimal icon poster designs. I really wanted to create a visual which had this totally alternative aesthetic if it was a clean edged poster i don't this it would reflect the dark nature of the movie so i wanted to give it that old screen printed style with the colours out of registration to reflect that... clean and minimal but twisted to giving it a more sinister and unnerving edge! 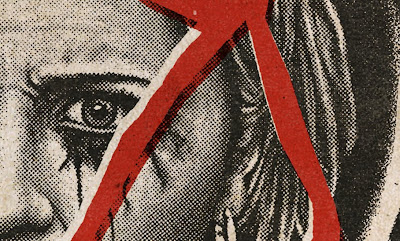 There is a scene in the film where all the guests sit down at the dinner table for the first time and in the rough cut they had temporarily laid in a Wendy Carlos' track of 'Funeral of Queen Mary,' and her music has such a powerful unnerving bizarrely trippy quality that I wanted something which looked like that felt, even down to the title placement. I wanted it all to follow that sort of big twisted beat 'BAM' 'BAM' drum beat with the heavy WOULD YOU at the top and RATHER at the bottom, i sort of felt what the director was trying to pick up on and reflect the atmosphere of this 'Lambrick Foundation' and the unnerving tone of the film as the game of 'Would You Rather' unravels over dinner."

As David Harley wrote in the Bloody Disgusting story 'Queen Mary' has since been replaced with a new track by Daniel Hunt (Ladytron) and Bardi Johannsson (Bang Gang).

Well hope you dig the different vibe on this one, you can view the trailer on BD as well... 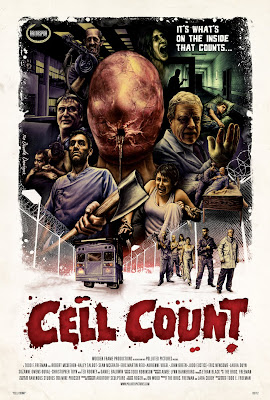 For Cell Count I wanted to crate a modern illustrated montage poster. A lot times of this type of work can get labelled as 'retro' but i really wanted to show that this type of art is still as fresh, fun and relevant for today's movie market in 2012 as it was back in 1972.

Cell Count is also the type of movie which can benefits from this school of poster art as there s some much going on, so while you could just depict one isolated character or image to promote the film, it wouldn't really tell you the whole story! and my main aim for the design was to capture all the rich nuances, characters, plot twists and atmosphere of the movie to build this static trailer.

I took a lot of influence from the Thai posters of the 70s, as they always had such a great flair for balancing out a broad spectrum of elements but still tying them together in a composition that looks unified as a whole.