An evening with... 'The Dude Designs' Shoot part 1

Here are some phots from the first half of An evening with The Dude Designs short, filmed by Andrew Gaston about the Fathers Day poster... talking about design straight to Camera can be a bit dry so we decided to spice it up a bit and turn the whole thing into a quirky little themed 70's style programme, keeping in with that DD vibe and hopefully make a few people laugh.

In the words of Burt Reynolds 'Portraying a self-mocking hustler'.

Here's an interview from the Couch Cutter with DD about poster design and general exploitation movie chat... COUCHCUTTER.COM 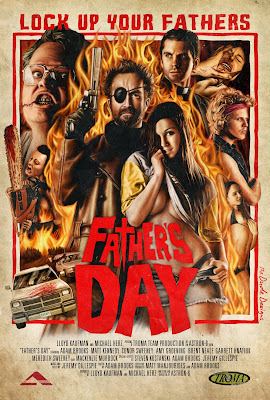 Lock up your fathers it's... Fathers Day

I got approached by the ladies and gentlemen at Troma and Astron 6 and to do what the dude does best and come up with some classic exploitation art for there new film Fathers day, So this ones all flames, boobs, chainsaw, guns and of course a car chase...

The subject of the film is a rather sensitive one... dad rape 'all fathers all raped... can you see a pattern' to quote!!

Now I didn't want to display man on dad action in graphic detail for fear of turning people off (and its also not the main style angle we where going for, The film itself has some awesome home video touches like its almost recorded straight off the TV with intro ads and even a trailer break so we wanted to communicate that trip with the classic 70's, 80's style... which is why i guess they came to me!!). They had some really strong characters going on and i do love my classic character driven posters So i really concentrated on them for the layout.

The title design was supplied for this one and the design is quite a square block so i had to center things around it in the layout as its not a format which i could just run along the bottom of the poster. I then worked the main characters in a sort of pyramid form (with them almost coming out of the title and looming away into the distance... a bit of a homage to the man who loved cat dancing poster there!) surround by the flames which work great as a vehicle to frame the characters and they also do have a meaning... but you need to watch the film to find out what!!

With that as the focal point i worked all the other elements around it to give the poster its narrative. I brought in the dad rapist as the largest character in as hes the evil character and wanted him to have that mysterious haunting quality in the background looming over the proceedings. This is the offset on the right hand corner with the classic girl being assaulted scene... which seems to be becoming a regular occurrence in these posters! (see Savage Streets and Hobo).

The inclusion of the priest and 80's man whore where also vital as they are two integral characters to the plot so i couldn't leave them off!!! plus the priest does add an unusual angle to the narrative i felt.

Lets not forget that classic car chase car chase which had to be added for two reason 1. it is the amendment to the helicopter rule, (one or the other has to appear in there some where!!!) and 2. i think the guys at Astron 6 where rather proud of there death defying stunt work on this one so wanted it included in there somewhere.

Finally to get that specific balance of the sex and the violence i used the strippers to frame the bottom of the poster (note the creative nipple coverage!!) and tada... you have yourself a classic exploitation poster!

The whole thing went rather smoothly, so thanks to the guys and girls at Troma / Astron 6 for that!