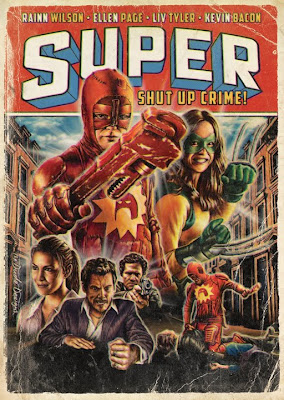 This is the German DVD Blu-ray artwork i created for Kotch Medias release of James Gunn's Super movie. they sound like a company who know what they like and it wasn't the truly terrible UK artwork. Time was tight on this one and i was working on another job when this came in so i worked up a rough photo concept which now seems to seep out on-line but this is the actual artwork!

The original artwork had a strong creative and took a more high concept route. which i guess didn't really work more for the DVD market the UK released THIS! (shudder). So i got contacted by Kotch Media to produce a design which would be more cast orientated! as there really is a plethora of talent going on in this one (Rainn Wilson, Ellen Page, Liv Tyler, Kevin Bacon and the great Michael Rooker!!) so i wanted to get everyone in the action but still give the artwork some style which related back to the films storyline. I explored two routes for this design one being the classic 70's esque over the top explosion and big title treatment, then this one which Took the super hero theme which treated the whole DVD cover  a classic comic book design, the composition still has that narrative poster style but building it around the comic book concept allows the visual to capture the vibe of the films story line and then relate it back to the viewer, it also gives the cover a different twist and a more fun look to stand out on the shelves against the other movies. 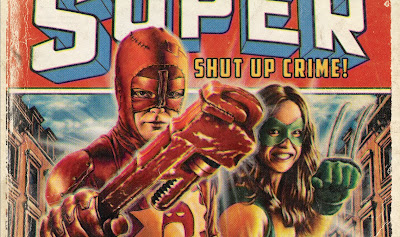 I saturated the use of colour more in the illustration to give the thing that comic illustration vibe without being too 'cartoony' and polished it off with that old dot printing effect and offsetting the colour plates slightly so the whole piece has that distorted out of registration look (you can see a more detail section above). Again i was very happy that Kotch media ran with this as well and didn't just request a more clean version of the artwork to be used.

An interview i recently did for bloodsprayer, this one has tongue firmly in cheek as Rondal the writer wanted to interview the man behind the man... ?!?!
So i squeezed into my ever shrinking 70's western suit cracked out the Cubans poured a dram of whiskey and sat down to talk as 'the dude' exploitation poster designer extraordinaire and all round social degenerate!! HERE 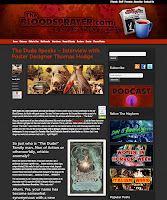 Dont forget to check out the making of at 'An evening with The Dude Designs' short on you tube so you can see what REALLY goes into designing a classic exploration poster! (and yes i will keep plugging it the damn thing cost me over £300 to produce it!!!)

Email ThisBlogThis!Share to TwitterShare to FacebookShare to Pinterest
Labels: awards

Download and make your very own FREE Hobo Video artwork 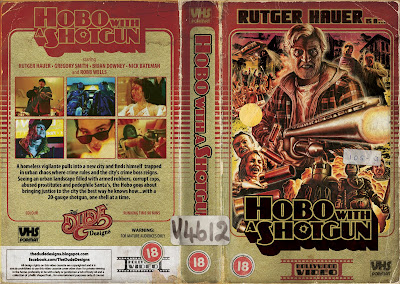 To say thanks for all the on going support with these posters and to give a little something back!
It's not easy but seeing people enjoying this stuff and hopefully bring some magic back into the world of poster designs makes it all worth it! 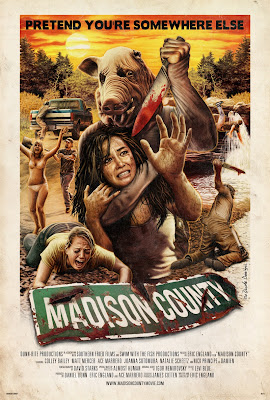 Its been hectic over he past few months going full time on the poster work so i haven't had time for write ups unfortunately. in time ill go back and fill in the blanks, however here's the latest, i actually completed this design right after The Legend of the Psychotic forest ranger LOTPFR, (so if you want to know what i did last summer, all two weeks of it in the UK! this is it!!) having already jumped on the more tongue and cheek side of the slasher, i had to change gears for this one and deliver a more straight laced piece. Also i couldn't use an AXE! i was geared up for a chainsaw but was informed there is NO chainsaw used, so i dragged old Betty back to the WORK SHED! and sat down to create a more serious slasher design!

The film itself is by first time director Eric England and the lovely producer Ace Marrero (who very kindly brought me a MASSIVE -over 6ft- poster of the Italian death wish 3 as a thanks!!). Its very much in the same classic vain as films like A Texas Chainsaw and The Hills Have Eyes, so i really wanted to draw that vibe out for people in the art to allow people to make the connection and as always set them in the right mind set when siting down to view the film. 90% of the action takes place in the day this time so we wanted the design to reflect that sunlight rather than the black darkness which you usually get in horror posters, rather than dropping in a blue sky though i wanted to give the piece more atmosphere so thats where the orange sky came in, the same way the puple sky works for night!! it just holds more visual impact i felt.

The guys already had some photo posters out with a still of the pigs head being cradled by Damien, so they wanted a more classic montage style design, to deliver the narrative of the film and give it more emotional impact (i do apologies for women get such a bum deal on this one but a girl screaming holds a lot of cultural baggage through the history of horror film posters generally women tend to do the screaming, i suppose we could get into the psychology with the majority of the audience being male, what emotions this will drive in the viewer, i like to think its one of protection and damsels in distress, your probably going to want to run in and protect a woman being attacked by some pig head wearing psycho than the guy at the gas pump! (they where always the throw away kills at the start weren't they! gas pump attendants DO NOT have a great life span in slasher films... think about it!).

I digress... so i wanted to get some kills n thrills around the poster in a forest setting but for the main centerpiece i really needed to have a classic slasher pose of the BIG money shot scream and knife wielding maniac, so a total nod to posters like Beyond (awesome poster!), the devil within her, hell hole and Mansion of the doomed, among many others where all influences! but how to get both killer and victim playing to the audience in an embrace of death with full frontal screams and a totally over sized knife coming out towards the audience! became the challenge. So i had to do the old Drew Struzan trick and once again convince my girlfriend to pose for some reference shots (thanks babe you have to suffer for my art as i tell her!!) then add a WHOLE lot of forced perspective! in the final composition i had Damien doing a sleeper hold from behind glad to see those years of watching wrestling didn't go to waste... what do you mean its not real dad!!) i also had to fulfill my hand obsession by having the unfortunate girl grabbing outwards, i love posters which literally reach out to the audience it adds a feel of depth to draw the viewer in and hopefully pull a few emotional strings with a plea of HELP ME! to the audience. Please do note the grime on the girls body as that became a real pain to do but when i had her clean it just didn't have the same atmosphere!

Finally the title which was also total Biiiiiatch! to illustrate if it was just text the job would have finished but painting the sign with the rust! (don't attempt to paint rust at home kids its very monotonous!).

Over all the feedback was great especially a great comment from the producer "looking at it felt as if I was watching a video" which was brilliant as that was the exact tone i wanted to go for this time!

Well hope you like it dudes... All the best Tom!