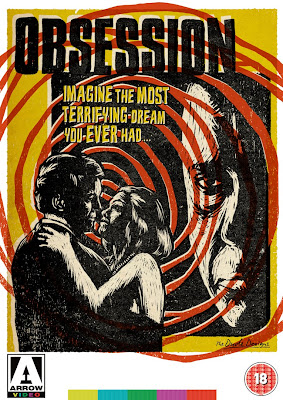 Also this week the artwork for Obsession got released so im posting that up as well! this was done way before the Fantastic Factory and Hobo but took a while to get published.

Obsession by Brian De Palma its a Classic you have never seen, originally penned as a Homage to Hitchcock's Vertigo, the guys at arrow requested something fitting that had a Saul Bass Flavour, now this was done before the FF collection so up to now all arrow stuff was painted and i did a couple of concepts which combined that pained style with a Saul Bass touch but this one was more out there style wise so wasn't sure they would go with it but they did!

I wanted it to have that Saul Bass Vibe so people would get that visual recognition of the Hitchcock connection but i needed to put my own stamp on it and i didn't want to just do a total pastiche of a Saul bass poster. Also i felt due to the nature of the film being a bit of an 'unkown classic' it needed more of a visual narrative to draw you in. (that's part of the problem with the whole minimal poster trend, it does tend to rely on you knowing something about the film/story line for you to get 'it' and have that visual recognition or your left thinking WTF!? a bit). So instead i looked more towards Saul Bass's technique of woodcut printing to get the vibe across, researching into woodcut illustration i found the work of Mark Rowden Really lnspiring.
So that was the technique sorted then for the layout!

The basic story of the film is 'its a man haunted by guilt following the death of his wife', so to get this across to the viewer I divided the poster up in two halves the bright past and the dark present circa 1979. So you have Cliff Robertson expression of pure desperation set in this black square looking down on him and his wife (Geneviève Bujold) dancing from the opening scene surrounded by this bright yellow, this is then all tied together with the classic spiral to represent the Hitchcock connection!

See its not just a case of slapping things about on a page to make it look nice. You really do need allot of thought and consideration behind a piece or people will see through it, that's why it always comes back to research! You need a good grounding for a design/ illustration to give it that substance and allow you to explain what you have done and why, it also helps you sell in the designs to the client. 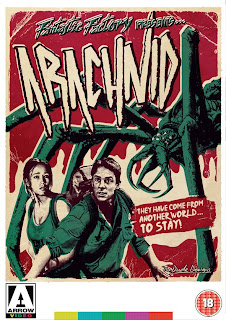 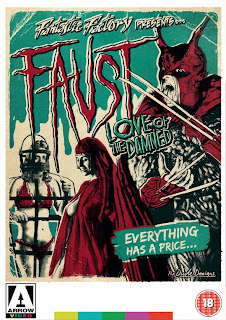 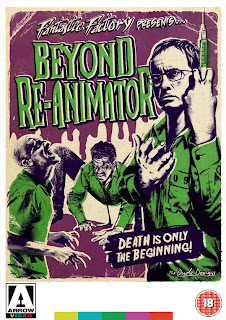 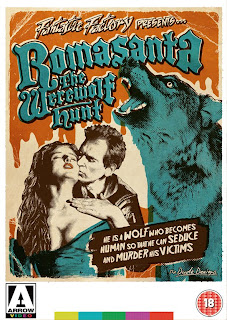 Here is the Fantastic Factory Collection,

I got given a collection of four dvds from arrow: Arachnid, Faust the love of the damned, Beyond Reanimator and Romansantana the waerewolf hunt and a short brief to 'unify the titles' and the connection was that they’re all Brian Yuzna (Director of Re Animator and Return of the living Dead 3) productions. I did a bit of research and found they fell under his production company set up in the 90s called the Fantastic Factory so hence the Fantastic Factory presents... (it was going to be the Brian Yazuna Collection at one point but it was considered a bit confusing as he directed some produced others and was a creative producer on one so not the strongest link).

So For these cover i looked at ways of making the series totally different from everything else that i have done for arrow so far. Give them a strong identity which would be able to link four VERY different titles together and would still be an adaptable style to suit each title, Most importantly though i needed to make them visually very collectable especially with the posters inside.

I did my visual research (one of THE most important parts to design!) and looked towards doing them in a limited edition screen print style. An alternative pop bubble gum twist on the classic B movie poster. Particularly with such titles like ARACHNID and FAUST they sounded like modern drive in movie titles.

So i my main aim became to create something fun and vibrant which would stand out from other dvd styles on the shelves.