Thought i'd share this, i got interview request by Marcus Goodman about getting started, poster design in general on his site Hamster Triathlon so i thought it was cool you can read me rambling on: PART. 1 HERE 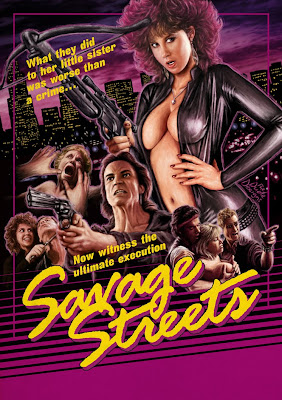 Savage streets was a cool one to work on as i got to give it that real 80's video cover style mixed with the classic action poster montage structure and inject a little something different to the other versions that have been done, the composition was the main challenge with this one as there had already been about 6 totally different posters, video covers and DVD covers already designed for it in the past, and they where all great (even if someone felt Adrienne Barbeau was hotter looking that Linda Blair on the classic uk Medusa release).

I also really enjoyed playing about with the type giving it a new title treatment and getting that quintessential VHS style to it... ahh a rough script with a flat colour drop shadow... nothing says video box art better!!!

Well hope you like this take on a classic video title. 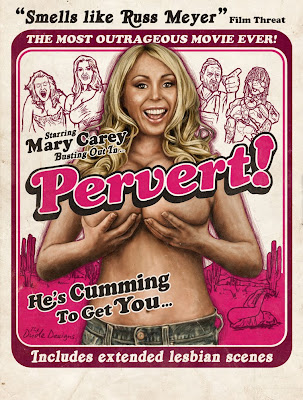 PERVERT! Well this was a bit of an oddity Its one crazy ass movie, created as a homage to Russ Meyer movies of the 60s.

So this design is a total love letter (or soiled sock!... bad joke!) to the sexploitation film posters of the 60's and 70's.

unlike allot of the action / horror style posters theses usually had a more minimal layouts focusing on the one girl with the big curves to pull in the punters to the seedy cinema joints, i did have to tone the curves down a bit though after the first draft so i hope ive still managed to maintain the impression of Mary Cary having some shape in this film and not just looking stick thin).
where these posters really went for it though was with the use of type, something which doesn't get used much in the Arrow illustrations so i think ive made up for it with Pervert!!
Russ Meyer's was a total show man (i read some where that he used to make the posters first then if they where well received then he would make the film) and there was a definite carnival approach to selling these films, with outlandish statements made on them, so i took a couple of quotes form the us poster and DVD, but i have to admit im responsible for the cumming to get you and Busting out in... all bad puns i know!

I found allot of inspiration from posters like 'A trip with teacher' and 'Stepmother' where i loved the juxtaposing of illustration styles the main character is quite polished and then having rough sketchy line drawings for the background characters, its something i hadn't done before and i think works really well.

For the film title it was a bit of a twist on the classic cookie font which just says 70s and sexy so well, the phallic exclamation mark is actually not just a childish joke but like the innkeepers title has a bit more meaning behind it and the strange storyline... 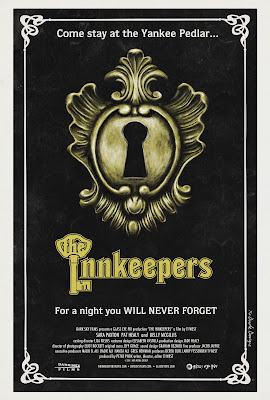 Here is the second poster for Ti West's The Innkeepers and this is as about as minimal as i get! Its designed more as teaser poster unless ive grinded away for days on these poster illustration i think something is wrong!! So this one was done as an extra because Ti and Larry Fessden liked the concept so much.

Its very much designed as a homage to the serious Mystery/Thriller posters of the 70's. Again still incorporating that Victorian vibe, which relates back to the hotels mysterious past...

Along the winding path of research i did into all things Victorian i came across designs for these ornate key hole protectors, they where Incredibly elaborate (as where most Victorian things) with these flowing and curling fluer (stylised decorative ornaments that resemble the fleur-de-lis = lily flower) details which i thought had this real sinister edge. So reworked the and designs slightly overemphasising them (as i wanted to keep it subtle) so they almost felt like clawing hands which would drawing you in to the darkness of the key hole if you stared at it too long and wouldn't want to see what lies in the cold empty darkness behind... MUWAHHHHH HAA HHHHHHHHAAA!

I do have to admit it was Ti Wests idea to have an empty key hole i originally had the idea of the ghost peaking through, so i guess less is more and this way it lets the imagination fill in the blanks!

The great thing about the Innkeepers posters is that creatively i was able to reference the rich history of Victorian design for my inspiration, allowing them to have some creative substance rather than just 'a grind house poster' particularly with this title where that wouldn't have suited the plot line and totally given off the wrong impression. 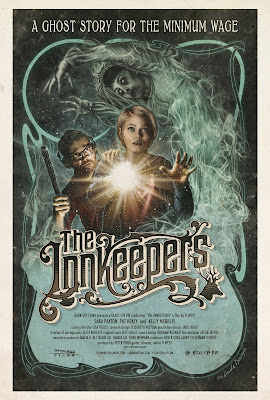