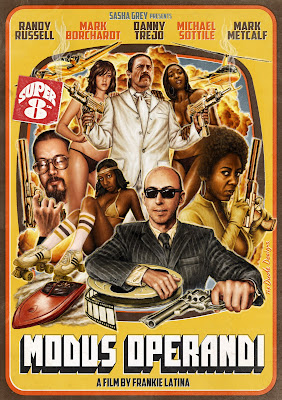 Here's the artwork for the DVD release of Frankie Latina's 2009 film Modus Operandi, which stars Danny Trejo, Mark Borchardt, Michael Sottile and Randy Russell. Frankie wrote, shot, and directed Modus over the course of four years, all shot on Super 8 film. It's a homage to B-Movies of the 60's and 70's. So i guess that's why they came to me!

So this was always going to be a fun cheesy design to play around with!
Colourful, packed with action, sex, gals, boobs and guns! Planes, helicopters... and even a phallic boat this time!

The guys wanted to promote Danny Trejo (being the most well known actor of course!) but while he's kind of a sub-character who's integral to the story, his appearance in the film isn't long enough to sell the film purely on the strength of. So i had to make him central to the montage but not the most prominent element, hence the other characters being larger!
Randy Russell (guy at the bottom) is the main protagonist and he's not your typical looking lead character, so i did pimp him out a bit more for added attitude with the shades and suit look. I also couldn't pass up the opportunity (with the film reel element of the storyline - watch the DVD, it will all make sense!) to play up a total and shameless homage to one of my own favourite film posters for the 1976 film Hollywood Man with William Smith!! Coincidentally I think Hollywood Man has just been released on DVD again in the US.
The other two main characters are Dallas Deacon (on the left) and the sexy Black Licorice... who i again pimped out in a low cut gold lame jump suit! Gotta love the jump suit!! I also threw in a bit of sexual innuendo with the aforementioned speed boat powering out from between roller girl's legs!

Colour-wise i went for a strong 70s yellow, brown and orange pallette, taking lead from the very cool interior decor styling seen throughout the movie (a set Frankie the director actually built himself... the man can decorate my flat any day!!!). I wanted to capture the same classic retro decor tone with the style of the packaging design. The use of the old Super 8 logo sticker was actually from the director who i got chatting with while working on the cover and i think it really builds on that whole vintage packaging vibe!