An evening with The Dude Designs

Directed by Andrew Gaston of Secret Films, you can see his other stuff here 1 2 3

You can view it in all its HD glory HERE! 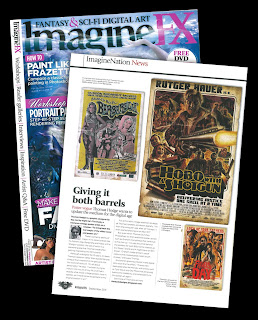 Very excited as its my first time in print for one of these interview articles... So go out and purchase a copy of imagine FX if you get the chance. 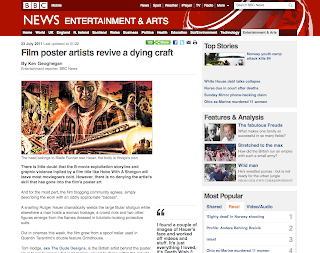 A great scoop for the old Dude Designs here a feature on the BBC news no less!!! where they talk about the lost art of film posters speaking with myself and the great Graham Humphreys!

You can read the article HERE.

Hobo With a Shotgun Competition 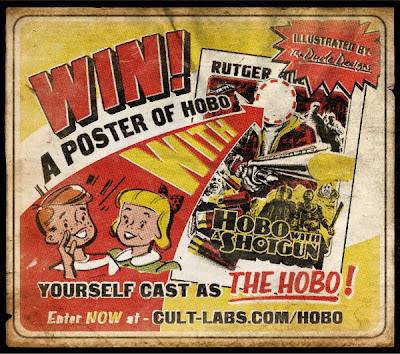 How would you like to be cast as The Hobo and have your very own portrait illustrated on the Hobo with a shotgun poster... Well now you can!
Cult labs are celebrating the Blu-Ray and DVD (sadly not VHS or Beta Max!) release by holding a competition to win a one off custom edition of the Hobo poster!

Details are here and the film site is here

Email ThisBlogThis!Share to TwitterShare to FacebookShare to Pinterest
Labels: competition

The Legend Of The Psychotic Forest Ranger 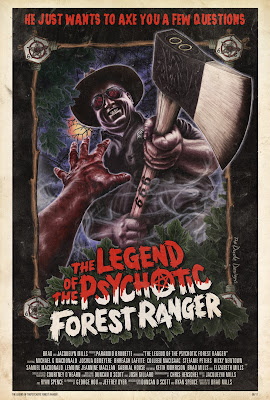 Well folks heres the poster for The Legend Of The Psychotic Forest Ranger one of two slasher films I’ve recently worked on. This was a small independent affair which I agreed to help the guys out on way back around the Hobo time, its just took a while to come around.
It was also a great opertunity sink my teeth into a horror genre poster, I’m a big horror fan and haven’t worked on any horror posters yet, plus it was a rare opertunity to do a cheesy, 80’s ‘in the woods’ slasher homage. So I could really ‘camp’ up the action (get it!!) In the design and go totally OTT.
There had to be a bit of a different approach to working on this design as there just weren’t any usable assets to work with for the illustrations, I didn’t even have a cut of the film. So we arranged a photo shoot with the guy who played the titles homicidal Maniac (and is actually a university professor!! ) and the Photographer Corey Kats (his site is here) who also worked on the film. I sketched out some comps showing poses and angles id like to see for reference then the guys went to work! Corey did some awesome pics which I could have created about fifty different designs from.
Although we had some great imagery to work with I still had to change allot of the elements around to get it all balancing (and fitting into) the composition. ALLOT of forced perspective was involved, which is the great thing about using illustration in movie posters, you can really accentuate the action more that straight photography can offer, having action bursting out and gives some real depth to the piece. So it something I like to play about with this as much as possible!
For the final design I kept with the concept which I had in my head from the start that would be a break from the trademark montage style and create all the action centered around the viewer, to really draw you in and give you the experience of what it would be liked to be in an classic cheesy 80’s horror film, running away from the manic killer through the dark misty woods, tripping and falling over... then looking back... and there he is behind you!!! Axe in had just about to hack you to death!
I also wanted to see if a could get the biggest god damn axe squeezed into it one as possible! (I don’t know if there’s a world record for the biggest axe on a film poster but I’m hoping to be a contender). I also through all the classic elements you would expect to in an 80s slasher moon, rolling mist, dark trees with lots of homages to everything from Sleep away camp to Silent Madness and Frightmare mixed in the design.
The Director Brad mills wanted to have glowing red eyes behind the Rangers glasses so I twisted this and gave him a red refection of a screaming girl, its more of an abstract image than a true reflection, which represents part of the films storyline (not to give too much away!).
For the title design I went for a complete Friday the 13th tongue and cheek nod. Had to be done! and good for getting people in the right mind set for the style of film.
Well hope it doesn’t give you any nightmares folks and catch you next time round with another slasher soon!!!!