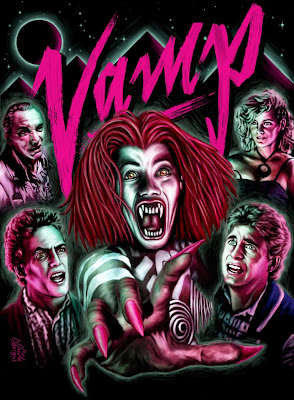 Here is the new illustration for the 80s classic Vamp!

When i was given the job the first thing they requested was that i incorporated a 'special' colour into the illustration. So colour became the big theme for this cover, it's also a representation of the films style too. when i watched it again i really picked up on the strong use of 'comic book' style lighting and neon colours used throughout.

It also really needed it to shout '80s' to people and i drew the title in a classic brush script (cornering the V and P into fangs, although this did get lost a bit lost behind the characters in the end), i then toyed with the idea of dropping in a green neon grid for the background but felt it didn't say anything about the film and instead i opted for some neon esque pyramid styling (a nod to the Vamps origins!) with stars and a full moon to set that 80's retro mood.

Finally i wanted to visually represent a more comical side of Vamp to let people know sort of film there getting themselves into. I felt going down a dark gory horror route wouldn't be appropriate for this title and would just alienate a load of potential viewers (its a extremely tame horror film by todays standards) so i was trying to sell it more on its strength of 80s teen horror nostalgia, appealing to any retro hipsters out there! or people just looking for a good ol' classic light harted horror romp! ... just like you remember them (before torture porn destroyed all that!).

For the layout i used Grace Jones for the main character to represent the horror aspect by having her literally lunging out of the cover to grab you! then i framed her with the other characters to show the more non serious elements with funny/repulsed expressions. 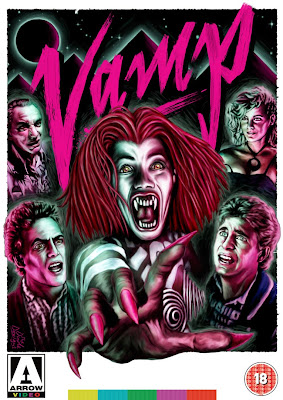