8 Questions with the Dude Designs 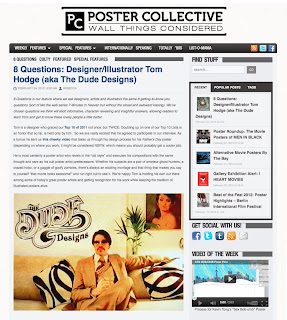 A brief chat with the poster collective about design and i select my rundown of (what i feel) are some of the best posters ever... HERE 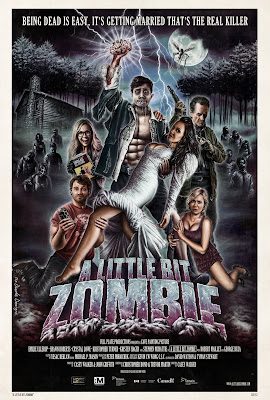 Here the poster art for A little bit zombie, its the first time I've got to really swing my design bat at a full on comedy movie poster!

During a weekend cabin trip to sort out wedding plans, Steve becomes infected by the zombie virus and Tries to battle his overwhelming desire for brains!

The basic challenge was to get 6 characters into a montage and give the piece a narrative whilst trying to make the design visually funny... and humour is an incredibly difficult thing to convey in a single static image (with a touch of horror!). To make the poster visually entertaining, i thought the best route was to create something epic and completely OTT for the subject matter, while playing on something that i depict a lot of in this type of work.... over blown machismo!

To create a classic comedy poster in a fantasy art style, so this piece really came to be a love letter to the such great artists who inspired me growing up, like Frank Frazetta (for EVERYTHING), Boris Vallejo (of course his Vacation stuff but soooo much more as well), John Bolton (thanks for the brilliant Army of Darkness!!). As the saying goes... 'standing on the shoulders of giants', ergo One who develops future intellectual pursuits by understanding the research and works created by notable thinkers of the past, (thanks wikipedia!!)

The comedy angle came from twisting that classic image of machismo by depicting the main character as this totally ripped zombie groom in a stereo typical heroic stance holding his ample-busted perma-tanned bride in one hand while thrusting BRAINSSSSS aloft to the gods!! but contrasting those cliches with a expression that screams PANIC I'M A MILD MANNERED HR MANAGER NOT A ZOMBIE !!! 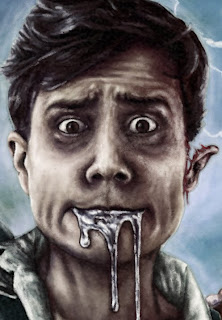 Tina the bride actually is more in control as character of the pushy bride who REALLY has to get married but possibly more for the attention than anything else!

In this classic setting i was also able to bringing out the rest of the characters personalities so we see Sarah (bottom right) as the not amused by the whole situation sister, Craig (bottom left) beer drinking frat boy esque best friend, Penelope (top left) a preppy zombie hunter and Max (top right) bad tempered zombie hunter, I'm a massive Stephen McHattie fan so it was a joy to be able to paint the dude!!! (i loved Pontypool and Casey actually got me a signed copy of the film for working on the poster!!). 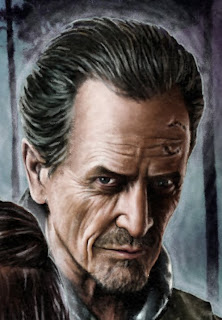 The background elements really help set the tone by allow the viewer to build up a subconscious impression of the story without being too busy and allowing the main focus to stay on the characters. 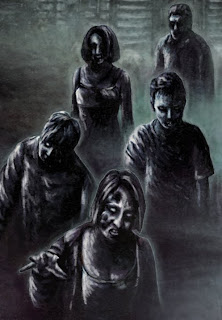 Title wise I've been looking for an excuse to create a cracked stone type design for ages and now was the time to fulfil that dream! 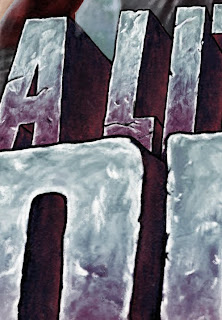 Due to the characters being smaller of this design there was a lot of intricate detailing going on that wont be visible on the web jpg (only the final printed piece), so I'm attaching a couple of closer details shots as well... Enjoy!!! 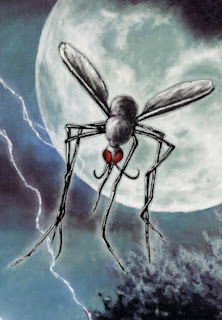