Hobo With a Shotgun Poster 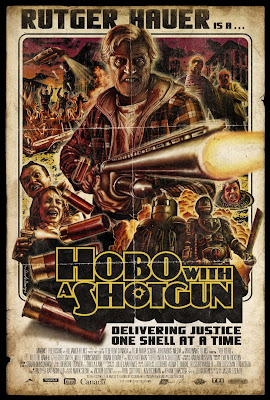 Well Its the big one and it's been all over the web now on!!:

I'm proud to present the new poster for Jason Eisener's Hobo with a Shotgun, which I've been excited about since I saw the trailer in the Tarantino/Rodriguez Grindhouse film(s). Now it's a full-length feature and staring The Hauer no less - it's a proper hark back to the vigilante films of the 70's/80's and the whole future gang/ punk films of the 80's.

So it was an opportunity not to miss!!! I posted a message on the Hobo site saying "I do posters etc, love to knock something together for you guys..." and the next thing i know Jason Eisener emails me back saying:

"I'm extremely impressed by your work. We seem to share the same artistic inspirations... Would love to see what you could do with Hobo With a Shotgun.... P.s Your Jaguar Lives is inspiring. Also did you make that vigilante video logo? Its amazing. "

Well I was stoked to say the least and worked my ass off to turn something around quickly before they forgot i ever emailed them!

There was no holding back on this baby - I went for the full balls out 70s/80s exploitation vibe, throwing everything into the pot and looking back over every exploitation poster I did for inspiration!

My main thought process/direction for the poster was to give it a strong narrative. I mean, that's what was so great and captivating about the old posters, they really drew you in visually, telling you what the film was about. It was easy with this film - all i had to do was say "Look at this cool thing here... and also over here... and check out Hauer, he's in it and he has a MASSIVE shotgun and he looks PISSED!!!"

I did take liberties with the shotgun, making it look more over-the-top/futuristic, which is all part of the style! It's just the done thing - check out the covers of Savage streets and the executioner part 2. Another must is that you always need a helicopter. Whether there is one in the film or not there's a definite correlation between the decline in the number of painted helicopters and the quality of movie posters these days! A helicopter tells you it's exciting, and there's a budget!!!
(Well, a helicopter in a poster used to tell you that but I'm getting old these days. Maybe kids today just aren't impressed by such a thing. When I was growing up we based an entire tv series JUST on a helicopter!!!)

As far as the colouring goes, everything I saw already for Hobo had a strong yellow and black colouring but I didn't want people to think of Kill Bill, as a friend pointed out, so I needed to bring in some colouring which would give the poster its own feel. So after looking at the trailer again and again and again...I wanted to reflect that vibrant, neon, almost-80's style, so i brought in a strong use of magenta/purple in the sky and on the lighting for Hauer.

The massive Hauer title at the top is, again, harking back to the glory days of the old Charles Bronson films, where the lead actor's name was usually bigger than the film title. I've got a great video of The Evil That Men Do on which most of the cover is taken up with 'BRONSON' printed across it three times! I didn't want to go that far but i felt RUTGER HAUER, quite bold, gave it some attitude and come on... it's RUTGER HAUER! This is the dude that kicked Gene Simmons's ass!!! And Harrison Ford's (that one's for making Indy 4!)!!! Then I played around with 'is'/ 'in' to link the actor and the movie title, but none of them seemed to fit. So i thought it would be funny to say RUTGER HAUER is a... Hobo With a Shotgun! And it stuck.

This really was a dream project, although it was also a whole lot of work! I'll fondly remember losing the will to live, sat in a seedy internet shop for 2 hrs while the slow-ass connection tried to send a 500mb file on New Year's Eve! ...but all for a good cause, great to work on from start to finish and the guys Jason Eisener (Director) and Rob Cotterill (Producer) were amazing and incredibly receptive to everything! Plus most of all it's going to be an AWESOME movie, the guys just get it! From the story, to the visual style, to the music!