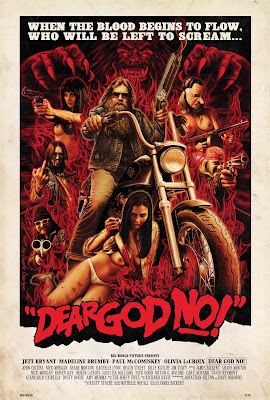 I was first attracted to this project after the director James Bickeret contacted and told me how it was 'Shot entirely on SUPER 16MM Fuji film and using equipment from the era' which got the juices flowing as its a similar work ethic i have with the design work.

Then secondly the bikers! Im a MASSIVE biker film fan and you just don't get that many 70's esque bikers films floating around these days so it was a match made in heaven! and i instantly wanted throw my hand into the annals biker film history by creating one of the coolest, meanest, mutha F*$KING looking biker film posters you have seen!! Something that you could see sitting on the walls of a Harley Garage but keeping tones of horror (left house on the left) meets monster (grizzly) film vibe.

James was cool to work with and pretty much let me do my thing all he suggested was he wanted to see boobs (not to worry about covering them up) and flames would be cool too!!

I didn't get to see the film before working on the poster as it was still being edited but the trailers got a lot in it so i was able to gather all i needed to know from that and i was also supplied the original soundtrack which the guys have put together so listening to that helped set the tone as well.

I started out with the title design as per usual and i toyed around with having the logo first in an iron cross format, but it left me with an awkward shape to fill the poster with and the name just wasn't jumping out enough. Dear God No! Is a real expressive phrase so i wanted to reflect that screaming tone in the design, im not a big fan of straight typed out logo fonts as i feel they look mechanical and rigid, hand drawn type like they use to do hand more of a natural flow it, even if you take a font and warp it in photoshop the edges just seem so harsh you can tell its distorted photoshop text so i usually mess around with fonts then take it into photoshop and redraw the whole thing by hand to get that classic vibe and warmth to it.

When it came to the layout i wanted to have Jett Bryant who plays the main big bad biker dude prominent as a main character... he's got this real iconic vibe going on with the beard, denim and hair (not to mention the Aviators), but i didn't want him to come across as a 'hero' so i gave him the ol' double barrel to have more of a sinister killer edge (plus it looks sweet), actually every one seems to be bad in this film so there's allot of frowning going on!!. Another big part of Jett's image is that beast of a bike, so pumped up the scale a bit and gave it the main focal point as it drives out of the poster.

Madeline Brumby is the other main character in the film, she plays the young innocent but not so innocent girl! So i gave her a dark edge (with a mean frown) and wrapped her round the base of the bike which i felt was quite reminiscent of that classic 70's fantasy art vibe.

Once the main section of the poster was nailed down i then needed to work in the other topless girls (i loved iconic image of the Nixon masked stripper especially!!) and more of the bikers so you got the feel of them as a 'gang' rather than just one loan biker. I also needed to have them more knocked back from the action, so as not to crowd the main focus of Jett and Madeline consequently having the whole thing looking like a visual mess. I know a lot of people want to use all the space in these montage style designs but it really isn't about that, you have to be careful to balance out the elements and not be afraid of the space, its not an all you can eat buffet its a poster!!

Then it became a bit of a challenge as to how to represent the 'horror'!! I'd done the bikers (check), boobs (check) but big foot needed to be in there somewhere. Finally i came up with the idea of using him as part of the background image more and colouring him red, this knocked him back even further back and gave the composition three focal plains, (biker and girl foreground, gang and stripers mid ground, road and bigfoot background). The strong red colour also allowed me to do something different with the flames that James wanted and blend them in with big foot more.

You can check out the trailer HERE.

I also want to give a big that to Dave Harley and everyone at Bloody Disgusting for posting up the exclusive! tireless work guys, always appreciated!!