An unusual one, i have designed an identity for
HOVEL which is the working title of a living space Gallery an art intervention - a kind of crossroads for experimentattion - so the idea and the name plays with a lot of references ..the temporary living space which is squalid, dirty and poor - the cave of a hermit or a refuge - something unsantitary or unhygienic - a place where many poor people have to live - also a sense of old fairytales - the gingerbread house or the homes of the three little pigs.

The brief was for it to be an anti logo, the words drawn in a certain way to denotes some of the above qualities - something that should be ugly but isn't - at once ancient and contemporary ...a wolf trying to blow the word down and although it bends and looks like it may collapse it is resilient ..something make-shift - put together from different things but it can mutates and remake itself.

I hand drew the illustration and type then scanned it in and reworked the treatment in photoshop. 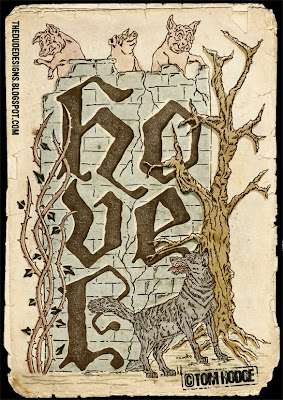