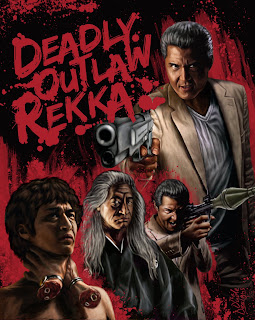 Hi, Ive been sitting on this one for about a month now waiting to post it, its the new illustration for Arrow Videos Deadly Outlaw Rekka directed by Takashi Miike.

DOR is more adult (and violent) film than Jaguar Lives, so it needed a darker vibe plus its also a more modern title (2002) so i couldn't have the same cheesy layout as JL obviously. But i still wanted to keep that classic looking VHS artwork style.So the first thing i did was to create the film title. I new i wanted the cover dark this time but with a vibrant title, so i immediately thought back to films like The Warriors, Repro man, Maniac with there splattered spray paint esque logos, which look great against a plain black background. Plus this film is all about bloody revenge so it was a bit of a no brainier what needed doing.

For the illustration itself i have always loved those dark to white style paintings so this would be a great opportunity to play about with that, having all the characters coming out and merging with the darkness would really set the right tone. As the painting was quite dark though i needed to give it that extra kick (so i wouldn't get lost on the shelf), so offset the black with big bold bloody red strokes and splatter it allowed me highlight the characters and incorporate the logo style into the illustration more.

There were not many assets to work with for this one. Particularly of the main character Riki Takeuchi, (he is one crazy mother! Just google him) but he has an awesome expressive face so i based him on a mixture of elements and the same goes for Yûya Uchida (the old dude) he has an amazing white main of hair, i had to drop him in on the cover (even though he doesn't last long on the film, he's quite central to the story and very iconic) his hair actually proved to be one of the most awkward bits to do. The only real image i had from the film was of the severed hand strangle (a brilliant scene!) but it was very dark (literally) with not much detail, so quite a bit of work went on for that one too.

All in all I'm really happy with how its come out, love the bright red contrasting with the black (i did use a similar effect on the Cronos which i did after rekka... but i just couldn't help myself!!). Well Hope everyone else likes it too. 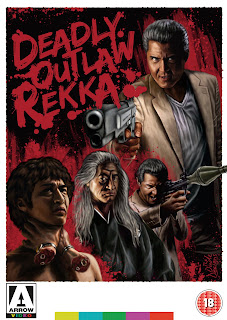